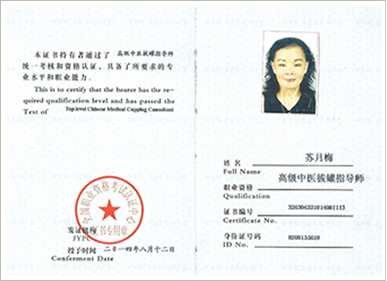 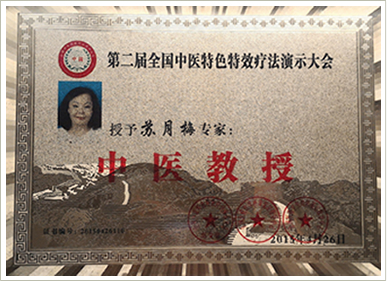 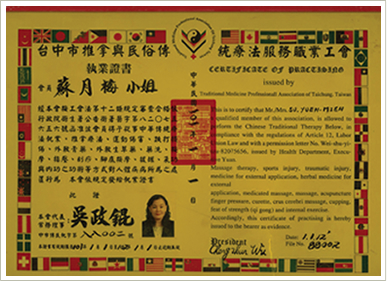 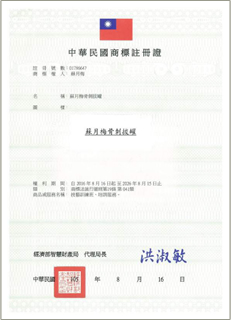 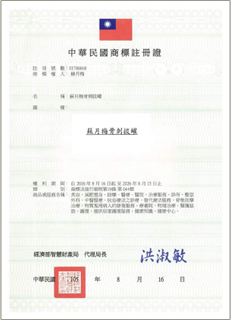 Brief introduction to the Inventor of Spur Cupping - Su Yue-mei

Brief introduction to the Inventor of Spur Cupping - Su Yue-mei Su Yue-mei, female, native of Taichung City, Taiwan, a member of Massage and Folk Traditional Therapy Trade Unions (1999 to date) and Taichung City Traditional Therapy Professional Trade Unions (2012 to date). After nearly a decade of clinical experience in traditional therapy, in the five elements, meridians, acupuncture points, basic knowledge of Chinese massage, Ms. Su upon a thoughtful exploration, created a spur cupping technique, with a similar technique to Small Needle Knife Therapy, yet smarter than traditional dry cupping, ordinary cupping and bloodletting cupping (haemospasia), by a direct suction to pull out the hyperplasia of bone (warts), thus immediately to clear soreness, to remove the root cause once and for all, and further bone (orthopedic) homing, so to allow patients a speedy recovery. And when the spine, vertebra, and intervertebral disc are normal and in healthy state, the human body parts and internal organs will all remain in the normal state of health. So Master Su』s invention of this type of spur cupping, or so called 「predicate closed surgery」 (one form of minimally invasive operation) is by far the most convenient, the most effective root treatment of health care, a preventive green therapy, which is an unprecedented and unique skill in Taiwan and even in the whole world. Over the past two decades, by word of mouth, Master Su has received patients in hundreds of thousands, island-wide of Taiwan, in addition to expatriates from Europe, Asia and the United States. Among them, an orthopedic surgeon from Italy, upon a treatment by Master Su, praised that this Oriental therapy is more effective, concise and neat than the Western surgery. Master Su』s hand touching for diagnosis and her poking with a needle knife on the applied skin area can only be described as state of the art, her removal of bone spur sticky substance is in such a skillful manner that makes a team of members from Taipei of traditional folk therapy, upon an observation find it awesome and unmatchable. A top Taiwanese rheumatoid specialist once declared a patient incurable by a rheumatoid disease. The patient later found Master Su to have a cupping detoxification treatment to expel mold inside the body, healed and cured, she was thus exempted her from being subject to a wheelchair restriction. She has cured numerous patients with early cancer; people with a stroke returned to normal state; victims of semi- paralysis restored their walking ability; those whose knees were to be replaced by artificial ones via a surgery were exempted the ordeal and those with retinal hemorrhage were spared from blindness.In view of the current world where due to a variety of illnesses including spur and taking Western drugs such as painkillers, anti-inflammatory agents, muscle relaxants, steroids caused side effects, there is a breakout of secondary injured patients, Master Su thus has made a strong commitment to save mankind, by deciding to pass down all the skills and experience she has accumulated for the past 20 years to foster more people to participate in such a rescue task, on one hand, it will also enable this ancient oriental way of therapy of two thousand years of history to gain a global recognition, on the other hand, she will have a peace of mind that there is no lack of successors and her invention of this unique folk therapy shall not be lost.